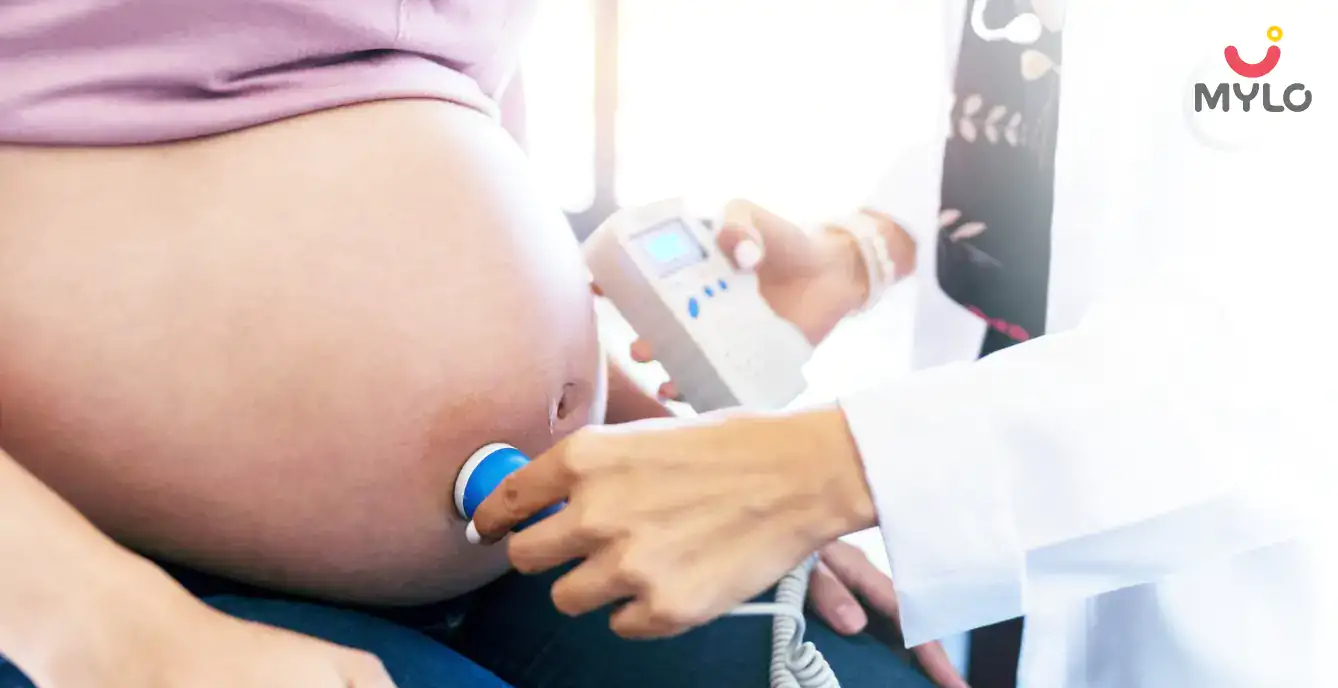 Meta: Do you want to know if you will have a Doppler scan during your pregnancy? Learn how Doppler scans are used to assess the health of your baby.

Blood flow and heartbeat may be measured via doppler scan pregnancy by using reflected sound waves that travel through the body. In order to assess the rate and direction of blood flow, Doppler ultrasound scanning may be employed. If the fetus's development is normal and the tissues receive adequate blood and nutrients, this information may be used to determine whether or not the fetus is healthy.

Women with high-risk pregnancies get a doppler scan in pregnancy using the same equipment as a standard ultrasound scan during the third trimester.

Fetal Doppler Scan - What Is It?

What is a doppler scan? As part of an ultrasound scan, a Fetal Doppler is used to evaluate the baby's growth and blood flow to various regions of the baby's body. A fetal doppler scan helps determine whether the placenta provides the infant with enough oxygen and nutrients.

A healthy fetus has normal blood flow, but an abnormally low or high level of blood flow suggests that the fetus is stressed.

Like a typical ultrasound scan, a Doppler scan uses high-frequency sound waves known as ultrasound, which are not audible to the human ear but are used to detect abnormalities in the body.

A microphone picks up the echo of the ultrasound created by the device as it bounces off bones and tissues. A transducer, a tiny hand-held probe, is used for all of this. The transducer is gently placed against the skin as a helping gel is applied to the abdomen. More dense materials like bones produce a better echo than the body's soft tissue, and comparing the echoes generates a picture of the baby, which is then presented in real-time on a computer.

These days, most ultrasound machines are equipped with a growth scan with doppler growth function, making it possible to do two scans simultaneously.

Is a Doppler Scan Safe to Have?

After knowing the doppler scan cost, a skilled expert can safely perform a Doppler ultrasound scan. To keep you and your child safe, the sonographer who does the scans adheres to a set of rules that have been established in advance. There may be a tiny amount of heat generated by the scanner since it uses a concentrated sound beam. Every ultrasonic scanner has a thermal index display that indicates how much heat is produced.

The low thermal index is standard, and there are several output levels for various stages of pregnancy. On the other hand, Doppler scans often take just a few minutes and are far shorter than the average 30-minute doppler scan report. Neither the baby nor the mother is in danger in any way. There is no evidence that ultrasound scans during pregnancy are dangerous, despite decades of use.

Doppler Scans Are Performed During Pregnancy For What Purposes?

Pregnant women often need two basic ultrasounds. In the first trimester of pregnancy, the doctor checks the number of babies, their heartbeat, their development, and their due date. A second scan is performed in the second trimester to ensure that the baby is growing correctly and to check for any physical anomalies.

A color doppler scan is used if the doctor notices anything unusual throughout these scans. In order to guarantee that the placental blood flow, the umbilical blood flow, and the heart and brain blood flow are normal, dopplers are often utilized. A constricted blood vessel, sickle cell anaemia, or RH sensitization may be to blame if any flow restriction is found.

There may be a lower birth weight, slowed growth, or smaller size due to the baby's lack of blood supply. Babies with sickle cell anaemia may have their stroke risk assessed using a specialized form of Doppler ultrasonography called a Transcranial Doppler. Additionally, doppler scan during pregnancy should be performed in the following situations:

Asked for a Doppler Test by Your Doctor

Pregnant women who have abnormalities or difficulties in previous scans are sent for a doppler scan during the third trimester by their doctors. Doppler scans are also often requested by clinicians for the following reasons:

Pregnant women who are carrying multiples are subjected to frequent Doppler scans to assess their progress. Since these pregnancies have the potential for several difficulties, this is why.

The baby's proper development depends on the placenta's blood supply. It is also possible to identify the placenta previa, in which case the Doppler scan is employed. The location of the placenta might vary as the pregnancy progresses.

Folic acid levels in the mother's blood play an essential role in embryo development. Doctors use doppler scan in pregnancy to evaluate the placental and umbilical artery blood flow rates. Smoking, some drugs, and other lifestyle-related factors may cause arteries to constrict, resulting in a reduction in blood flow to the heart. The fetus is deprived of enough oxygen and nutrients because of the narrowed arteries. This may also be affected by conditions like high blood pressure and diabetes.

Doctors perform a fetal Doppler scan if earlier ultrasound scans show that the baby's growth rate is not sufficient.

During A Doppler Ultrasound, What Areas Are Examined?

One everyday use for Dopplers is determining blood flow. In cases when abnormalities have been found in previous scans, the doctor often checks the mother and the fetus' blood flow.

The mother's uterus receives blood via the uterine arteries (womb). Pregnancy causes the arteries in the uterus to stretch and grow in size, supplying the uterus with an increased volume of blood. This physical alteration enables a greater volume of blood to pass through the arteries to ensure that the fetus has enough nutrients.

Blood flow to the artery may be reduced if the mother has a disease like Pre-eclampsia. Early detection of this problem may be made by using an obstetric doppler scan.

A doctor may recommend an umbilical artery scan if a woman is having twins, if one of the babies looks to be developing slowly, or if the infant has rhesus antibodies. More Doppler testing may be done to establish the reason and evaluate the baby's brain and aorta for any abnormalities (a major artery in the body).

This scan reveals how much blood is flowing through the baby's brain's middle cerebral artery, which is responsible for delivering oxygen and nutrients to the developing brain. Slapped-cheek syndrome, anemia, or rhesus antibodies are all indications that a scan may be warranted for the child.

A scrotal doppler scan like this one is quite rare. During the first trimester, it is used to screen for chromosomal abnormalities in the fetus and another diagnostic testing. The umbilical vein, which supplies the baby's heart with blood, is also scanned during this procedure.

Doppler scans come in a variety of varieties, each of which may tell you things like blood flow direction, blood velocity, and even blood location. Three kinds of Doppler scans may be utilized depending on the purpose of the scan:

Blood flow may be measured appropriately using a continuous transmission and receipt of ultrasound waves. Only the speed is shown, not the flow's direction or location. It's minor and widely used. Therefore, it's perfect.

Doppler duplex is able to create a picture of a blood artery and its surrounding organs while simultaneously monitoring blood flow.

However, it is possible to see the scan region using a color doppler scan , which is comparable to the dual Doppler. On the picture of the blood artery and surrounding tissues, a computer overlays color images indicating the flow of blood. Variations in the color scheme depict the rate and direction of blood flow, respectively. A Power Doppler, a variant of this equipment, may be utilized when examining blood flow in organs.

Before having a Doppler scan, there are no additional recommendations to follow. Because nicotine causes blood vessels to contract, a false diagnosis of pathological constriction may be made as a result of its usage.

In the same manner that an ultrasound scan is carried out, a Doppler pregnancy test is also carried out. After knowing doppler scan pregnancy risk pregnant women are requested to recline on an examination platform with their skirts or slacks down to reveal their growing belly. A water-based gel is subsequently applied to the stomach by the sonographer.

In order to keep the transducer in touch with the skin, a gel is used to ensure that there are no air bubbles in between that may interfere with the sound waves. Real-time images of the scan are shown on a computer screen and stored for subsequent study. The scan should be finished within a few minutes, and there should be no discomfort. Also, to know fetal doppler scan cost, you can search on the internet.

An ultrasonic scan and doppler fetal test is non-invasive and painless. In order to visualize how blood moves through a vessel, it employs a technique that utilizes reflected sound waves. As blood cells move, sound waves bounce off them and provide a precise image of their speed.

You can figure out how much blood is flowing via the umbilical cord between the baby and the placenta based on that number, too. The placenta and other main blood arteries' functionality and health may be assessed as a result. If there are any of these conditions, it is possible to determine whether or not the mother is at risk for pre-eclampsia. This may also be of interest to you: What to expect in a Nuchal Translucency scan during your Pregnancy?